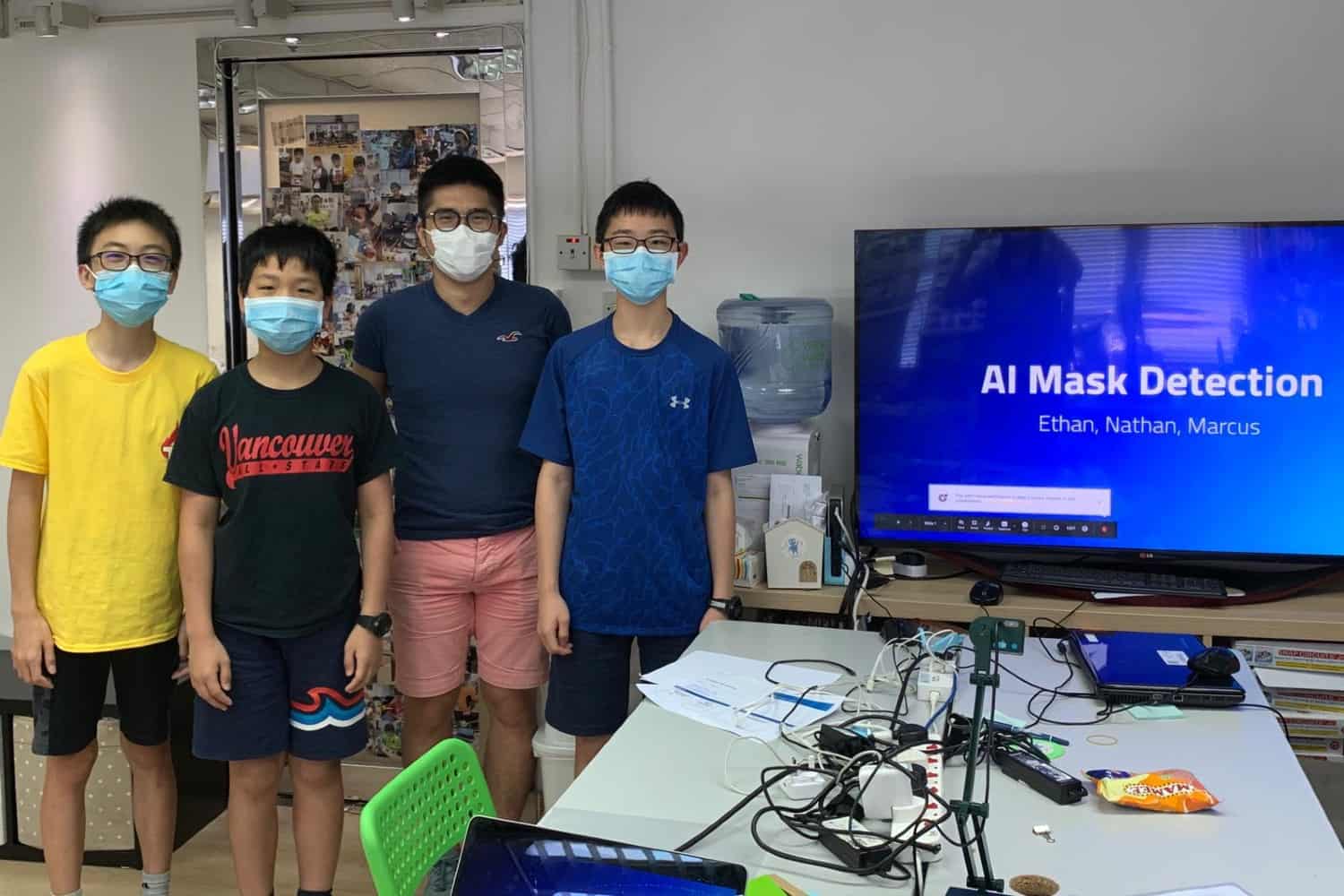 During the past few years, human beings have been facing unprecedented challenges pertaining to survival. One of them is definitely the outbreak of COVID-19, the virus that set us apart and nearly put the world to a halt due to social distancing measures. Luckily, social innovation integrating technology and empathy helps us to overcome.

An urgently needed system for swift and effective mask recognition

One example is a swift and effective mask recognition which enables us to detect whether people wear masks in public to prevent viruses from spreading. Believe it or not, this technique is done by a team of young innovators studying at Hong Kong secondary schools, under the supervision of dedicated instructors of Blueinno Technology Limited. The development and testing results have been published in the academic journal HKIE Transactions of The Hong Kong Institution of Engineers.

Checking face mask regulation can exhaust much manpower and resources.

The team of three young innovators

The mask detection system developed by the team of three young innovators supervised by Blueinno's instructors.

"Enforcing the mandatory mask rules imposed by the governments manually is simply impractical, that's how we came up with the idea of developing the automatic mask detection system", shared by Nathan, "the purpose of this system is to detect whether people are wearing masks properly and reduce the dependency on human workforce".

The team started with exploring different object recognition and classification algorithms available on the market, such as RCNN, R-FCN, SSD, RetinaNet and YOLO. They finally chose Detectnet, a framework developed by NVIDIA, because of its outstanding speed, accuracy, and ability to be implemented real time.

The training architecture of the DetectNet v2

They then developed a neural network architecture by utilizing the object detection framework of NVIDIA named DetectNet v2. The development involved multiple stages. First, photos of people with and without the face mask were inputted to train the neural networks by employing Resnet-18 as the feature extraction backbone. In this stage, they particularly focused on inference speed because it is critical in real time application.

Afterward, they passed the training data to a fully convolutional network for feature extraction and prediction. In the final stage, they added two separate loss functions to calculate the whole system loss, in order to gauge the system overall performance. It ended up using around 12,000 photos for training the system. The team then experimented the system by trying it out at the entrance of a tutorial centre in Hong Kong. The setup includes a camera, speaker, monitor, and NVIDIA Edge Device. The NVIDIA Jetson Xavier NX was selected, given that it has a small form factor yet a powerful AI chip capable of running neural network applications at a fast rate. Along with Resnet-18, two more backbones, Resnet-50 and MobileNet, were chosen to compare the experiment data in order to select the best one to match with our use case. As a result, Resnet-18 outperformed the other two, and hence was deployed to the NVIDIA edge device. At the same time, the DetectNet v2 detector also outperforms YOLOv3 tiny architecture when inputting the same amount of training data.

"The experiment reported in the paper has provided solid evidence about the possibility of a reliable real-time face mask detection system", said Nathan, "also, the system requires no data to be transferred over the internet for processing and analysis, thereby protecting individual privacy while performing detection in real-time application". Balancing public interests and individual rights is one of the key benefits of the system. Experimenting the system at a tutorial centre

“I am very impressed by their creativity and effort in the development process, and very proud of what they finally achieved”, shared by the team’s supervisor, Dr. Calvin Kam, AI Team Training Coach of Blueinno, “this innovation is definitely not the end and has lots of potential to be commercialized in the future. Also, the detection technique is not limited to the face mask, but a great variety of objects”.

In fact, the team is already planning further development of the system by including  temperature screening and integrating with the CCTV system, in order to pave the way for future commercialization. Now their innovation has been recognized by the engineering community by publishing a paper documenting the above results in the academic journal HKIE Transactions of The Hong Kong Institution of Engineers. All the team members are very confident that their innovation can be realized into real products on the market in the foreseeable future. The team would also like to use this opportunity to thank Blueinno's instructors, including Calvin, Sing, Sabrina, and Monica, for their guidance and supervision. They also feel grateful to Charles from Nvidia for supporting them with valuable support in terms of  hardware, such as the NVIDIA edge device, and software system, such as the DetectNet v2 framework. "Without all these supports, we could not have achieved so much with the experience of undergoing a proper academic research process with trial up to the industrial standard", Nathan concluded.

Developing both skills and attributes as an innovator

“I am so proud to see their ideas and hard work have come to fruition”, said Monica, Founder and Director of Blueinno, “they really live up to our motto, we empower, you innovate. It also provides solid proof about how our project-based approach in weekly programs or summer camps, as well as private coaching sessions, work by inspiring our students on how to translate their ideas into prototypes and workable solutions".

"More importantly", Monica further shared her observation, "I can see that they have developed mature personality in the project, like respecting different perspectives and opinions, empathy, critical thinking, unflagging spirit, discipline and determination in the scientific quest, and an entrepreneurial mindset. Technology skills and knowledge are necessary, but it is these attributes making an innovator and entrepreneur". Armed with this innovation, we can stay together and interact with each other as before. We need no longer be separated and isolated, helping society restore to normal. With young innovators like Nathan, Ethan, and Marcus, we see ordeals like the COVID-19 no longer a challenge, but a springboard to take us human beings advancing further with technology and empathy. We look forward to seeing more innovators and their inventors in the near future!

Want to learn more? Schedule a free consultation session with our education experts and let us show you around our innovation lab!